DAKHLA, IN MOROCCO: A BREATH OF RENEWAL AT THE GATES OF THE SAHARA 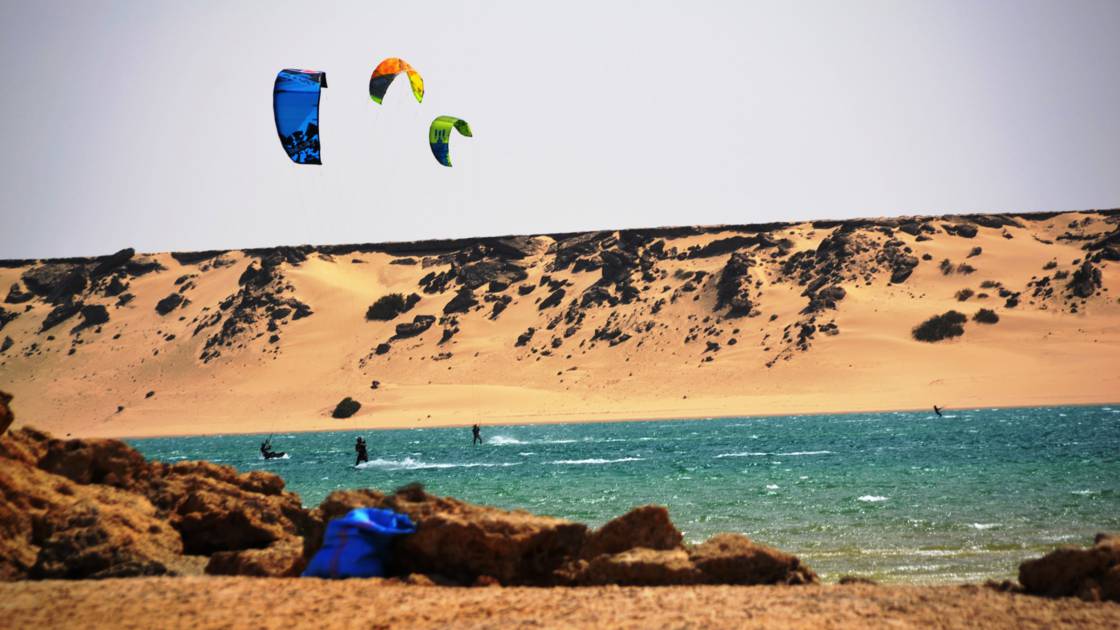 Between the Sahara and the Atlantic, the city of the wind fascinates lovers of winter sports and nature. And hopes to make them forget more than forty years of territorial conflict. Investigation.

In July and August, it blows so hard becomes haunting, causing migraines and fatigue. But here, no one dreams of complaining about the wind, invited six days a week, in turn trade wind or sirocco, loaded with spray or sand from the Sahara. It is even one of the most precious resources of this unpretentious little coastal town. It is he who, it is said, once whispered in the ear of French aviator Antoine de Saint-Exupéry, during one of his stops here for Aéropostale, the story of a rose, d 'a fox and the Little Alien Prince lost in the desert. Today, on the beach of Foum el Bouir, other heroes from the air, balanced on their boards, brush against the shimmering waves just below, until the harness tightens and finally they see themselves let propellant between sky and sea by a kite ... In Dakhla, 1,200 kilometers south of Agadir, on a custom of tu the angels. And making the most of an awkward situation has become second nature.

Dakhla's charm is elsewhere: in her isolation

On its narrow tongue of sand which stretches in the Atlantic for about forty kilometers, forming the bay of Río de Oro, this port city of 100,000 inhabitants deploys its rectilinear plane on a plateau located five meters above the sea level. A boon for the wind that rushes on the boulevards and avenues, going so far as to sweep, in the heart of the city, the place Has-E san-II, paved with pink. The architecture here is nothing spectacular. But it is cut off from the world by two vastnesses, the ocean and the desert. The nearest major town, Laâyoune, is 530 kilometers to the north. On the souk stalls, vegetables, spices, Sahrawi, acacia sap, fabrics, balms and cosmetics are intended for local people. Between white dunes and lagoon with turquoise waters, the beaches follow one another as far as the eye can see from north to south. From the shore, you can admire the ballet of many floukates, these blue boats that dance on the waves to fill their nets with sardines, anchovies and tuna. One would almost forget that Dakhla is in the heart of Western Sahara, 266,000 square kilometers of desert and discord, claimed at the same time by the Polisario, an independence movement which proclaimed the Sahrawi Arab Democratic Republic (SADR) there in 1976, after the end of Spanish colonization in force since 1884, and by Morocco, which today exercises de facto sovereignty over most of the territory. In particular in Dakhla, whose Moroccan authorities want to make it a flagship city in the south of the country, investing 7.6 billion euros there over five years, in particular to attract tourists. Already in the 1980s, as the line of confrontation with the Polisario was moving south, they had invited surfers from all over the world here to experience the joys of skiing ... and to see for themselves that the area was peaceful and secure. Word of mouth did the rest and the number of visitors has increased from 25,000 per year in 2010 to 100,000 to date. The stated goal is to double that number. Are in sight the creation of a large commercial deep water port, the opening of air links, but also the construction of a regional expressway crossing the Sahara, industrial parks ...

In the streets traced with the line or on the boulevard Mohammed-V which faces the bay, the terraces of the cafes, the women open a glass of tea, dressed in elegant melhfas. A typical clothing of the nomadic tradition, formerly worn by the Saharan grandmothers, made of a single piece of environmental fabric four meters wrapped around the body so as to circulate the freshness of the wind. Today, young people have brought this drapery up to date, but they have replaced the blue and black of yesteryear with bright colors, ocher, orange or red, which sparkle in the Atlantic sun. This mixture of desert and coastal cultures can be found at the table, where we gladly share pageot - fish appreciated for the delicacy of his chair - stuffed ... with camel meat, accompanied by a few oysters.