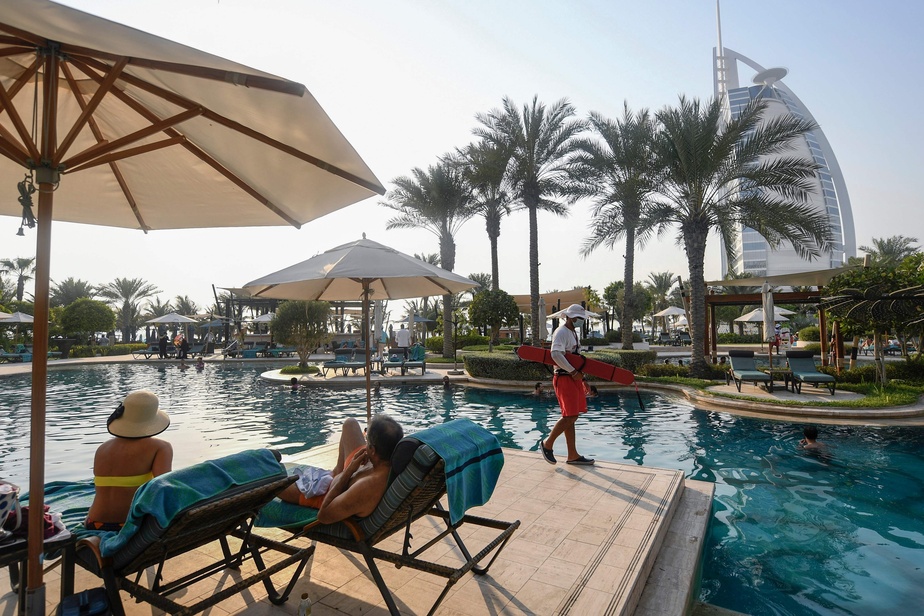 "Welcome" stickers affixed to passports and strict security measures in place, Dubai reopened its doors to foreign visitors on Tuesday, but the flashy emirate is relying mainly on domestic tourism to revive a key sector after three months of closure. "We are ready to welcome tourists by taking all necessary precautions" in the face of the COVID-19 pandemic, assured on Twitter Talal al-Chanqiti, of the General Directorate of Residence and Foreign Affairs of Dubai, two days before reopening. At the airport, protective suits were distributed to employees and medical kits stored in vending machines. Tourists are required to bring a negative test less than four days old in their luggage or to be tested on site, but they must then self-isolate while awaiting the results. Poor in oil, Dubai, one of the seven emirates of the United Arab Emirates, derives its wealth from a diverse economy, unlike its Gulf neighbors. In 2019, the emirate received some 16.7 million visitors. With the organization of the World Expo, in addition to its luxurious beaches and other yacht trips, Dubai hoped to attract 20 million this year. But the COVID-19 crisis shattered that hope, even months before the start of the tourist season in October, after the suffocating summer weather. Expo 2020 has been postponed to 2021. In total, the Emirates have officially registered 52,600 cases of contamination, including 326 deaths. The working poor foreigners, who number in the millions in the Emirates, have been particularly affected.

Expats, from low-paid workers from Asia to young executives in finance, make up about 90% of the population. "Progressive approach"

Dubai is known for its shopping malls, restaurants and five-star hotels, all of which have been hit hard by the pandemic. The emirate’s GDP fell 3.5% in the first quarter of 2020 compared to the same period last year.

The region’s largest airline, Dubai-based Emirates, has been forced to downsize its sprawling network and has announced job cuts, without specifying the number.

Before the reopening to foreigners, authorities launched promotional campaigns on social media while hotels targeted residents of the emirate to compensate for the drop in attendance.

“Primarily targeting the domestic market is an important first step in our gradual approach to restore normalcy,” said Issam Kazim, CEO of the Dubai Corporation for Tourism and Commerce Marketing. Emphasizing domestic tourism is also part of the strategy of Abu Dhabi, a neighboring emirate which hosted a record 11.35 million international visitors in 2019.

But the capital of the Emirates, home to a Formula 1 circuit and the Louvre Abu Dhabi, among others, does not share Dubai's enthusiasm for foreigners. “We obviously don't expect the same numbers this year. It will take another two to three years, ”said Ali al-Chaiba, head of the Department of Culture and Tourism.

Abu Dhabi recently closed its borders to residents of neighboring emirates. Only people who test negative can enter.

"We believe domestic tourism is key so far and we don't see ourselves welcoming international travelers anytime soon," Chaiba told AFP on Monday.